Here is a link to our group blog if anyone wants to check it out: Life Beyond the Bluff – we have some great reviews on shopping, restaurants, and music that are a nice distraction from finals!

Also…I recently blogged for Seventeen Magazine! I was an intern for them last fall and was asked to interview an upcoming Los Angeles-based designer, Anh Volcek. Check it out here: L’une Collection Review

Aside from using Wikipedia as a starting point for research, I’ve only had a couple of editing encounters with the website. The first was sometime during my Sophomore year in high school when my Art History class had taken a trip to the library to do research for a project. A friend next to me was researching Cubism, and had come across the Wikipedia page on Pablo Picasso. A few minutes later, he told me to visit the same page and check out the list of his children – “Lee Hale” appeared right beneath Paloma. I’m not sure how long Lee remained as part of the Picasso family, but I know that it was up for at least a couple of days.

END_OF_DOCUMENT_TOKEN_TO_BE_REPLACED

Last week, Erin Aubry Kaplan came to LMU to speak to the English Department about her writing and her career. Kaplan began working mostly as a columnist, but says that she became more of a “first person journalist.” Kaplan’s writing started to include her own personal stories combined with the bigger stories of her community. When she wrote about the Los Angeles riots in 1992, she says that she felt like a representative. She felt like it was her mission to write for her people and her place – as a journalist, she was their advocate.

In writing her personal essays, Kaplan looks at the bigger picture of the situation she is in, and tries to determine her place in that picture. For her, the “personal is always the political.” Kaplan described this concept when discussing her essay called, “The Butt.” In the essay, Kaplan writes about her butt and the large presence, literally and not, that it has in her life. Being a black woman has a lot to do with the way that Kaplan views her own body and how others view her, as well as other black women. In the essay she says, “I am acutely aware that my butt means different things in different contexts. At a private screening at a the­ater along the Beverly Hills strip of Wilshire Boulevard, at a gallery opening at the Westside Pavilion, I can wear tight-fitting clothes with impunity. If the largely white crowd is looking, it is doing so discreetly, between bites of salmon tarts.” By discussing her butt, she is talking about something both personal and political.

I thought that Kaplan’s perspective of journalism today was interesting and very true. She said that media has lost perspective, and discussed the concept of imbedded journalists. These reporters who go abroad to be “imbedded” during war do not connect any dots for their viewers – instead, they become a PR person. There are restrictions on what they can report on, so they create a picture of the situation that someone else is dictating.

This week MediaJobsDaily featured a posting about the importance of digital knowledge for job seekers. The post specifically focuses on development within the Hearst Corporation with regard to college recruiting and qualities that they are looking for in potential employees. Scherri Roberts, the head of HR at Hearst, said that their employees working in print have too much on their plates since they have been responsible for both print work and material that appears on iPad apps and websites. People who have experience in app production are desirable candidates for the company right now. I guess it’s a good sign for our generation of “digital immigrants” who may be interested in both the print world and the digital world. Roberts doesn’t say that employees in print are being replaced, but says that people with more digital experience are supplementing them.

The article also included a video featuring Esquire’s iPad app (the website won’t let me embed it here). I think that the video is quite appropriate considering our recent class interaction with the iPad, and also my most recent blog post below. Personally, I love taking trips to Barnes and Noble to buy books and magazines, and don’t think that the iPad will ever be able to evoke the same feeling of having a book or glossy magazine in your hand. Yet, I have to admit that the iPad is a great tool, and I wouldn’t mind owning one for travel purposes. I’m impressed by the image quality and features of the Esquire app, as demonstrated in this video, but don’t think I’ll ever chose to read a magazine on a screen. That is, if I eventually will still have the choice.

The Power of Print

After discussing the iPad a couple of weeks ago, I remembered this advertisement that I’ve seen in various magazines. The Power of Print campaign has come out with various ads that reiterate the importance and power of magazines, which I hope will not falter as the iPad becomes more widely used. 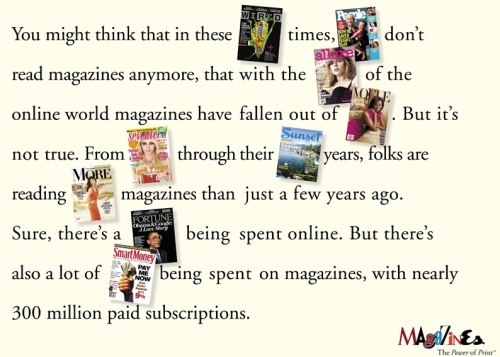 This past week I attended the “Woman Who Teach Art for Social Change” event at the Bellarmine Forum. Women from various organizations that work to help children through the arts spoke at the event. Sherry Jason from the City Hearts organization began the forum with a touching story of how she decided to begin the organization. In 1977, Sherry was working as a lawyer and had to go on a your of a juvenile hall center. At some point during her visit, she heard the sound of a piano – as someone who had grown up with music and dance, Sherry was curious and followed the sound. She discovered that it was a young boy who was having his first piano lesson and was already playing Mozart. At this moment she thought, what if he had met the piano before gangs and drugs? She realized that very few programs focused on prevention, and that prevention through arts could be extremely beneficial for children.

City Hearts was founded in 1984 and began providing free classes in the arts – dance, theater, and music – three times per week to children. Today, City Hearts offers 61 classes per week to 27,000 children. The organization also has a program called “Sentence to the Stage.” I thought that this was a really interesting concept – for non-violent crimes, youth can be sentenced to performing in a play for City Hearts. I think it’s great that kids are given an alternative to a community service sentence, or something along those lines, and may be given the opportunity to do something they’ll really love and benefit from.

Another organization at the forum was WriteGirl, which was just named California non-profit of the year. This organization, which was founded 10 years ago, involves in-school programs and also 9-month mentoring program. The 9-month mentoring program allows girls to be matched one-on-one with a mentor to work on essay writing, reading, and college prep. The girls learn song writing, screen writing, non-fiction, and creative non-fiction. At the end of the program, the work that the girls produce is published into an anthology. The in-school program works mainly work pregnant or parenting teens. Unlike with the mentoring program, their work is not published because much of what they write is very personal. Encouraging the girls to write gives them an outlet to speak their minds and recount events without worry.

I was really glad to attend this event because these are organizations I probably would not have known about otherwise. As someone who has grown up parents who were constantly taking me to museums, signing me up for art classes and piano lessons, and taking trips to Barnes and Noble, I really appreciate the arts and know how lucky I am. At some point I’d love to work for one of these organizations, or for something similar. I’ll definitely be keeping them in mind when making future plans.